Posted at 18:30h in Uncategorized by mikemiller
Share
Go Back 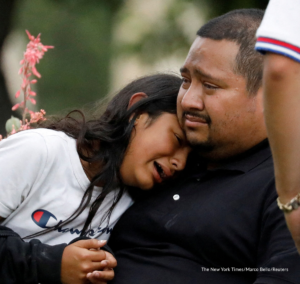 The Texas Rangers were formed originally to hunt down, capture
and return escaped slaves. They were definitely racist then,
and have continued with their culture of white supremacy and racism.

The Rangers admitted publicly they did not want to take action to
save the kids at Robb Elementary in Uvalde TX, when they said
“We didn’t want to be shot or injured”. That was probably a slip
of the tongue by someone, stopping short of finishing the sentence –
“For a bunch of brown skinned kids?”.

Racism is the shrug of the shoulders in reaction to the almost weekly
murder of black and brown young men at the hands of the police.

Racism is what fuels decisions to place extractive industry activity
close to black and brown communities, resulting in environmental
degradation and deadly health impacts, for profit.

If more than 330 mass shootings so far this year, including the painful tragedy in Uvalde, of nineteen innocent young bodies torn to
pieces by an AR-15, will not incentivize the media to call out the lies,
then what hope do we have for them to do so to support real change to combat the climate crisis.

None. Hope resides in our ability to raise our own and many other voices.